After Silence: Rape & My Journey Back (Paperback) 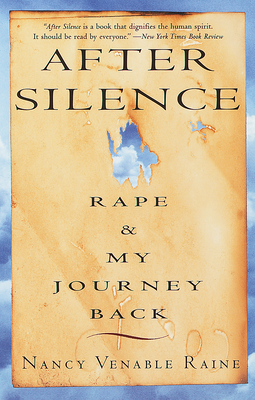 By Nancy Venable Raine
Email or call for price
Backordered

"Silence has the rusty taste of shame. The words shut up are the most terrible words I know. . . . The man who raped me spat these words out over and over during the hours of my attack--when I screamed, when I tried to talk him out of what he was doing, when I protested. It seemed to me that for seven years--until at last I spoke--these words had sunk into my soul and become prophecy. And it seems to me now that these words, the brutish message of tyrants, preserve the darkness that still covers this pervasive crime. The real shame, as I have learned, is to consent to them."

After Silence is Nancy Venable Raine's eloquent,  profoundly moving response to her rapist's command to "shut up," a command that is so often echoed by society and internalized by rape victims. Beginning with her assault by a stranger in her home in 1985, Raine's riveting narrative of the ten-year aftermath of her rape brings to light the truth that survivors of traumatic experiences know--a trauma does not end when you find yourself alive.

Just as devastating as the rape itself was the silence that shrouded it, a silence born of her own feelings of shame as well as the incomprehension of others. Raine gives shape, form, and voice to the "unspeakable" and exposes the misconceptions and cruelties that surround this prevalent though hidden crime. With formidable power and in intimate detail, she probes the long-term psychological and physiological aftereffects of rape, its tangled sexual confusions, the treatment of rape by the media and the legal and medical professions, and contemporary cultural views of victimhood.

For anyone, female or male, who has suffered from or witnessed the shattering effects of rape, After Silence inspires and points the way to healing. This landmark book is a stunning literary achievement that is a testimony to the power of language to transform the worst sort of violation and suffering into meaning and into art.

Nancy Venable Raine is a poet and writer whose work has appeared in many national publications. She and her husband live on a farm in Virginia.

"After Silence is a book that dignifies the human spirit. It should be read by everyone."
--New York Times Book Review

"There are few published first-person accounts of the experience of being sexually pillaged and its aftermath. After Silence is one of the first and, I would wager, it is always going to be one of the best."
--New York Times Book Review

"Neither self-pitying nor shrill, Raine has achieved an impressive balance between a starkly candid memoir of a personal trauma and an ingenious literary discussion of an all-too-often unspeakable crime."
--Publishers Weekly

"As Raine takes us through her personal journey of recovery, she also explores the shifting cultural consciousness toward rape. . . . It's this willingness to interrogate the world around her, combined with an emotional honesty that portrays intimate drama without resorting to sensationalism, that makes After Silence one of the most important memoirs of the 1990s."
--Ron Hogan, Amazon.com

"Terrifying though it is, I couldn't put this book down. . . . What attracted and held me is Raine's engagement with the material, her engagement with her life. And she is wise; she knows a lot about life. If you have been raped, you must read this. Even if your life is going well, this book will hold you rapt, for it tells us what we most want to hear: if we work at it, life may give us a second chance."
--Jesse Kornbluth, AOL.com

"A brave, an important, and a necessary book."
--Anna Quindlen