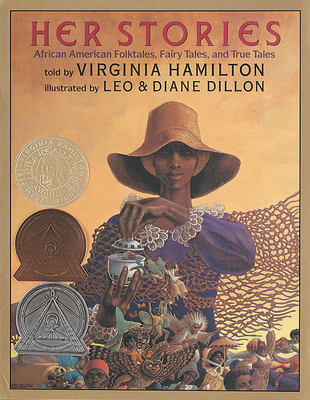 Virginia Hamilton (1936-2002) changed children's literature for generations of readers, winning every major award in her field across the globe. Her awards and honors include the Newbery Medal, the National Book Award, the Boston Globe-Horn Book Award, the Hans Christian Andersen Medal, a MacArthur Fellowship, and four honorary doctorates. Virginia was married to Arnold Adoff, and they have two children and one grandchild.

" The storytelling is dramatic and direct in this collection of 19 tales... The Dillon's glowingly detailed acrylic illustrations extend the horror, comedy, rhythm, and spirit of the tales." Booklist - starred review

"...these are tales to be read over and over again." - PW - starred review

".. It's hard to envision the shelf- children's or adult - on which this volume doesn't belong." - Kirkus pointer review

"Virginia Hamilton and the Dillons have produced yet another superb offering.. The book is a gallery of beautiful women of color. Entrancing and important, this notable colloaboration desrves a wide success." - SLJ- starred review