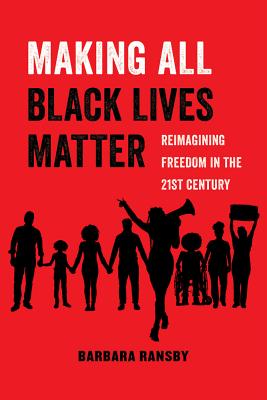 “This perceptive resource on radical black liberation movements in the 21st century can inform anyone wanting to better understand . . . how to make social change.”—Publishers Weekly

The breadth and impact of Black Lives Matter in the United States has been extraordinary. Between 2012 and 2016, thousands of people marched, rallied, held vigils, and engaged in direct actions to protest and draw attention to state and vigilante violence against Black people. What began as outrage over the 2012 murder of Trayvon Martin and the exoneration of his killer, and accelerated during the Ferguson uprising of 2014, has evolved into a resurgent Black Freedom Movement, which includes a network of more than fifty organizations working together under the rubric of the Movement for Black Lives coalition. Employing a range of creative tactics and embracing group-centered leadership models, these visionary young organizers, many of them women, and many of them queer, are not only calling for an end to police violence, but demanding racial justice, gender justice, and systemic change.

In Making All Black Lives Matter, award-winning historian and longtime activist Barbara Ransby outlines the scope and genealogy of this movement, documenting its roots in Black feminist politics and situating it squarely in a Black radical tradition, one that is anticapitalist, internationalist, and focused on some of the most marginalized members of the Black community. From the perspective of a participant-observer, Ransby maps the movement, profiles many of its lesser-known leaders, measures its impact, outlines its challenges, and looks toward its future.

Barbara Ransby is a historian, author, and longtime activist. She is the author of the acclaimed biography Ella Baker and the Black Freedom Movement. Ransby was one of the founders of African American Women in Defense of Ourselves in 1991 and the Black Radical Congress in 1998. She is the editor of the journal Souls: A Critical Journal of Black Politics, Culture and Society, and Professor and Director of the Social Justice Initiative at the University of Illinois at Chicago.

“This perceptive resource on radical black liberation movements in the 21st century can inform anyone wanting to better understand . . . how to make social change.”
— Publishers Weekly

"In a political moment where Black liberatory work rarely includes time for archiving, reflection, and record-keeping, Making All Black Lives Matter is a critical contribution. . . . Essentially, where mainstream narratives proclaim that movements and protests simply erupt erratically from anger, pure emotion, and vengeance, Ransby is a balm. She shows how every mass-led struggle sits atop the labor, sacrifices, and investments of many organizers who will never be seen, named, or rewarded for their contributions."
— Black Perspectives

“An accessible analysis of contemporary American racial-justice organizing...This perceptive resource on radical black liberation movements in the 21st century can inform anyone wanting to better understand why these movements sprang up or how to make social change.”
— Publishers Weekly

“As accessible as it is urgent and necessary. Ransby’s eyewitness account of the players and the events that built the Black Lives Matter movement spring to life with an immediacy and familiarity that provides rich color and feeling to what might have been, in other hands, a bloodless march through recent history.”
— The Washington Post

“As much a movement biography (or autobiography) as a history. Ransby was there, in the ranks of the leadership, and tells the story with the urgency and passion we might expect from a participant.”
— In These Times

“When Ransby writes, ‘We look to the new generation of organizers, dreamers, visionaries, and freedom fighters to forge out of this current state of emergency, this current bleak moment, a new path, for Black people, for all people, and for the planet,’ one feels that she is speaking not just to the amazing constellation of individuals profiled in her book, but to her readers, too.”
— Rethinking Schools

"Deserves a place in the personal libraries of all those interested in learning more about U.S. history and liberation movements as well as in every public library."
— RGWS: A Feminist Review

“Award-winning historian and longtime activist Barbara Ransby outlines the scope and genealogy of this movement, documenting its roots in Black feminist politics and situating it squarely in a Black radical tradition.”