The Essence of Progress and Poverty (Dover Thrift Editions) (Paperback) 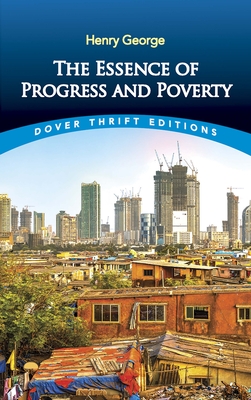 In this concise text, the distinguished American philosopher John Dewey compiled excerpts from the massive Progress and Poverty to provide those unfamiliar with Henry George's work with the essence of the author's thinking on economics. In his Foreword, Dewey noted, "It would require less than the fingers of the two hands to enumerate those who from Plato down rank with George]. No man, no graduate of a higher educational institution, has a right to regard himself as an educated man in social thought unless he has some first-hand acquaintance with the theoretical contribution of this great American thinker."
Fifteen brief chapters feature passages from George's highly influential book and examine why poverty persists throughout periods of economic and technological progress as well as the basis for economic cycles of boom and bust.

Henry George (1839-97) went to sea on a merchant ship at age 15, and by the end of the 1850s was working in San Francisco as a typesetter. A career in journalism followed, and George gradually become a successful popular speaker on the issues of his day as well as an effective writer. He moved to New York around the time Progress and Poverty was published and ran for mayor, losing in an election that may have been marred by fraud. His second campaign for mayor ended with a fatal stroke. Thousands turned out for his funeral, which was described as the largest in New York's history (or at least the largest since the death of Abraham Lincoln); even George's bitterest opponents at Tammany Hall flew their flag at half-staff on that day.