Come Hell or High Water: Hurricane Katrina and the Color of Disaster (Paperback) 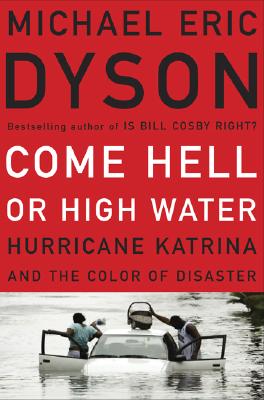 When Hurricane Katrina tore through New Orleans and the Gulf Coast, hundreds of thousands were left behind to suffer the ravages of destruction, disease, and even death. The majority of these people were black; nearly all were poor. The Federal government's slow response to local appeals for help is by now notorious. Yet despite the cries of outrage that have mounted since the levees broke, we have failed to confront the disaster's true lesson: to be poor, or black, in today's ownership society, is to be left behind. Displaying the intellectual rigor, political passion, and personal empathy that have won him acclaim and fans all across the color line, Michael Eric Dyson offers a searing assessment of the meaning of Hurricane Katrina. Combining interviews with survivors of the disaster with his deep knowledge of black migrations and government policy over decades, Dyson provides the historical context that has been sorely missing from public conversation. He explores the legacy of black suffering in America since slavery and ties its psychic scars to today's crisis. And, finally, his critique of the way black people are framed in the national consciousness will shock and surprise even the most politically savvy reader. With this clarion call Dyson warns us that we can only find redemption as a society if we acknowledge that Katrina was more than an engineering or emergency response failure. From the TV newsroom to the Capitol Building to the backyard, we must change the way we relate to the black and the poor among us. What's at stake is no less than the future of democracy.

Michael Eric Dyson has been named by Ebony as one of the one hundred most influential black Americans and is the author of fourteen other books. He is University Professor at Georgetown University and lives in Washington, D.C.