The Divine Comedy: The Inferno, The Purgatorio, and The Paradiso (Paperback) 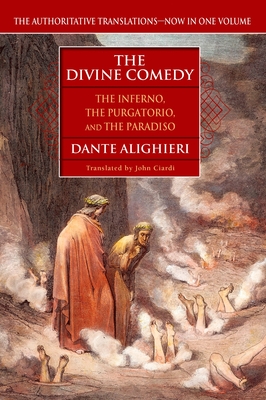 The authoritative translations of The Inferno, The Purgatorio, and The Paradiso—together in one volume.

Belonging in the immortal company of the great works of literature, Dante Alighieri’s poetic masterpiece, The Divine Comedy, is a moving human drama, an unforgettable visionary journey through the infinite torment of Hell, up the arduous slopes of Purgatory, and on to the glorious realm of Paradise—the sphere of universal harmony and eternal salvation.

Now, for the first time, John Ciardi’s brilliant and authoritative translations of Dante’s three soaring canticles—The Inferno, The Purgatorio, and The Paradiso—have been gathered together in a single volume. Crystallizing the power and beauty inherent in the great poet’s immortal conception of the aspiring soul, The Divine Comedy is a dazzling work of sublime truth and mystical intensity.

Dante Alighieri was born in 1265. Considered Italy’s greatest poet, this scion of a Florentine family mastered the art of lyric poetry at an early age. He is the author of the three canticles, The Inferno, The Purgatorio, and The Paradiso. Politically active in Florence, he was banished to Italy in 1302. In 1274, he met the great love of his life, Beatrice, whom he immortalized in La Vita Nuova (1292) and The Divine Comedy. He died in 1321.

“Dante and Shakespeare divide the world between them—there is no third.”—T.S. Eliot

“Ciardi has given us...a credible, passionate persona of the poet, stripped of the customary gauds of rhetoric and false decoration, strong and noble in utterance.”—Dudley Fitts

“I think [Ciardi’s] version of Dante will be in many respects the best we have seen.”—John Crowe Ransom