Talkin' About Bessie: The Story of Aviator Elizabeth Coleman (Hardcover) 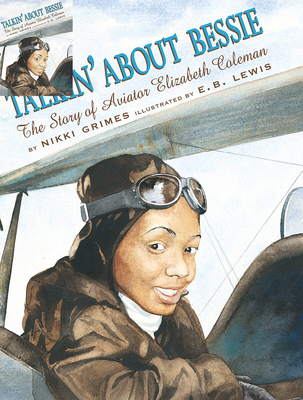 Soar along with Bessie Coleman in this inspirational tale of a woman whose determination reached new heights.

Elizabeth "Bessie" Coleman was always being told what she could & couldn't do. In an era when Jim Crow laws and segregation were a way of life, it was not easy to survive. Bessie didn't let that stop her. Although she was only 11 when the Wright brothers took their historic flight, she vowed to become the first African -American female pilot. Her sturdy faith and determination helped her overcome obstacles of poverty, racism, and gender discrimination. Innovatively told through a series of monologues.

E. B. Lewis Won a Caldecott Honor for COMING ON HOME SOON by Jacqueline Woodson. He has also won the Coretta Scott King Award and Coretta Scott King Honor three times. He graduated from Temple University's Tyler School of Art and now teaches at the University of the Arts in Philadelphia. Mr Lewis lives in Folsom, New Jersey. Visit www.eblewis.com to learn more.

Grimes skillfully employs first-person testimonial verse to give young readers a fully realized portrait of African-American aviator Bessie Coleman. At Coleman's death, Grimes invites twenty individuals to a fictionalized wake and, in valedictory monologues, has each remember Bessie and the forces that shaped her life. Bessie's father tells about leaving the family when his daughter was "jus' a chile." Her mother recalls how she wanted Bessie to "first learn the wisdom of the Lawd, / and then, the wisdom of the world"; an older brother comments on her drive, how she "kept her focus fixed...to find a lifelong work of substance"; her flight instructor remembers how bravely Bessie flew a Nieuport 82 the day after witnessing one crash to the ground in flames; and a young fan reveres her idol: "I haven't made up my mind about being a pilot, / but Bessie made me believe I could be anything." E. B. Lewis personalizes the tributes (and a concluding testimonial from Bessie) with small photo-like, sepia-toned portraits of the speakers. Impressionistic watercolors on facing pages evoke each incident and often soften the harshness in Coleman's life. Taken as a whole, these illustrations portray a young woman yearning for and taking pride in that "lifelong work of substance." Although the assemblage of mourners is slightly contrived (would a field hand Coleman once worked alongside and a woman who once hired her to do laundry really be present at her wake?), their parts in Bessie's story are integral to her early life. Grimes separates fact from fiction through introductory comments on the historical period and the setting, concluding observations about Coleman, and source notes. Like Bessie, this tribute to her life soars.--Horn Book, January 1, 2003--starred review

Historic flights take the spotlight in two fall titles. Talkin' About Bessie: The Story of Aviator Elizabeth Coleman by Nikki Grimes, illus. by E.B. Lewis, recalls the life of the world's first licensed African-American female pilot through 20 eulogies, fictionalized perspectives based on actual people. "I remember that bone-chillin' January day in 1892/ when Bessie's first cry raised the roof/ off that dirt-floor cabin, back in Texas," Bessie's father, George Coleman, begins. Newspaper editor Robert Abbott tells of her enrollment in a French flight school ("No flight school/ in our color-minded nation/ would accept a woman, or a Negro"). Lewis's elegant inset portraits appear alongside the words of each speaker; full-bleed, full-page paintings illustrate dramatic moments in Coleman's life.--Publishers Weekly, November 25, 2002


In a volume that looks like a picture book and reads like a series of closely related poems, Grimes offers a many-sided portrait of the first African American aviatrix, Bessie Coleman. Following a brief introduction to Coleman's life, the story, couched in a fictional framework, opens in the parlor of a house in Chicago, where friends and relatives gather to mourn Bessie's death. Each spread features one person speaking about Bessie. A full-page watercolor faces a page with a small picture of the speaker and a free-verse reminiscence. The speakers range from mother to sister to flight instructor to news reporter, but teller by teller, the story moves chronologically and builds emotionally to the last entry, where Bessie speaks of the joy of flying. On the last page, Grimes comments on Coleman's life. Lewis' paintings, subdued in tone and color, reflect the spirit of the verse through telling details and sensitive, impressionistic portrayals. The verse reads aloud beautifully, making it a good choice for readers' theater. The book will also work well for reading aloud as the artwork shows up to good advantage from a distance. Although there have been other books about Coleman, this is a fine, original portrayal. --Booklist, November 15, 2002--starred review