On Becoming a Person: A Therapist's View of Psychotherapy (Paperback) 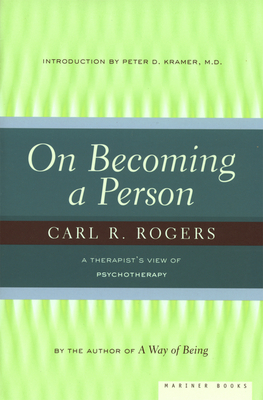 A landmark book offering a therapist's perspective on psychotherapy??—??a must-read for anyone interested in clinical psychology or personal growth.

Carl Rogers, founder of the humanistic psychology movement, revolutionized psychotherapy with his concept of "client-centered therapy." His influence has spanned decades, but that influence has become so much a part of mainstream psychology that the ingenious nature of his work has almost been forgotten. New discoveries in the field of psychopharmacology, especially that of the antidepressant Prozac, have spawned a quick-fix drug revolution that has obscured the psychotherapeutic relationship. As the pendulum slowly swings back toward an appreciation of the therapeutic encounter, Dr. Rogers's "client-centered therapy" becomes particularly timely and important.

CARL ROGERS (1902-1987) was one of the most influential psychologists in American history, and the founder of the humanistic psychology movement. He received many honors, including the first Distinguished Professsional Contributor Award and the Distinguished Scientific Contribution Award of the American Psychological Association.