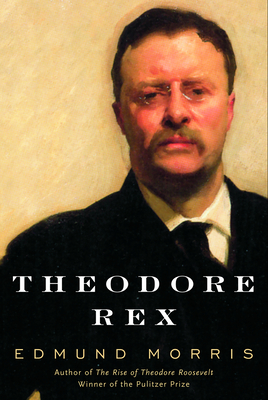 The most eagerly awaited presidential biography in years, Theodore Rex is a sequel to Edmund Morris’s classic bestseller The Rise of Theodore Roosevelt. It begins by following the new President (still the youngest in American history) as he comes down from Mount Marcy, New York, to take his emergency oath of office in Buffalo, one hundred years ago.

A detailed prologue describes TR’s assumption of power and journey to Washington, with the assassinated President McKinley riding behind him like a ghost of the nineteenth century. (Trains rumble throughout this irresistibly moving narrative, as TR crosses and recrosses the nation.) Traveling south through a succession of haunting landscapes, TR encounters harbingers of all the major issues of the new century-Imperialism, Industrialism, Conservation, Immigration, Labor, Race-plus the overall challenge that intimidated McKinley: how to harness America’s new power as the world’s richest nation.

Theodore Rex (the title is taken from a quip by Henry James) tells the story of the following seven and a half years-years in which TR entertains, infuriates, amuses, strong-arms, and seduces the body politic into a state of almost total subservience to his will. It is not always a pretty story: one of the revelations here is that TR was hated and feared by a substantial minority of his fellow citizens. Wall Street, the white South, Western lumber barons, even his own Republican leadership in Congress strive to harness his steadily increasing power.

Within weeks of arrival in Washington, TR causes a nationwide sensation by becoming the first President to invite a black man to dinner in the White House. Next, he launches his famous prosecution of the Northern Securities Company, and follows up with landmark antitrust legislation. He liberates Cuba, determines the route of the Panama Canal, mediates the great Anthracite Strike, and resolves the Venezuela Crisis of 1902-1903 with such masterful secrecy that the world at large is unaware how near the United States and Germany have come to war.

During an epic national tour in the spring of 1903, TR’s conservation philosophy (his single greatest gift to posterity) comes into full flower. He also bestows on countless Americans the richness of a personality without parallel-evangelical and passionate, yet lusty and funny; adroitly political, winningly natural, intellectually overwhelming. The most famous father of his time, he is adored by his six children (although beautiful, willful “Princess” Alice rebelled against him) and accepted as an honorary member of the White House Gang of seditious small boys.

Theodore Rex, full of cinematic detail, moves with the exhilarating pace of a novel, yet it rides on a granite base of scholarship. TR’s own voice is constantly heard, as the President was a gifted letter writer and raconteur. Also heard are the many witticisms, sometimes mocking, yet always affectionate, of such Roosevelt intimates as Henry Adams, John Hay, and Elihu Root. (“Theodore is never sober,” said Adams, “only he is drunk with himself and not with rum.”)

TR’s speed of thought and action, and his total command of all aspects of presidential leadership, from bureaucratic subterfuge to manipulation of the press, make him all but invincible in 1904, when he wins a second term by a historic landslide. Surprisingly, this victory transforms him from a patrician conservative to a progressive, responsible between 1905 and 1908 for a raft of enlightened legislation, including the Pure Food and Employer Liability acts. Even more surprising, to critics who have caricatured TR as a swinger of the Big Stick, is his emergence as a diplomat. He wins the Nobel Peace Prize for bringing about an end to the Russo-Japanese War in 1905.

Interspersed with many stories of Rooseveltian triumphs are some bitter episodes-notably a devastating lynching-that remind us of America’s deep prejudices and fears. Theodore Rex does not attempt to justify TR’s notorious action following the Brownsville Incident of 1906-his worst mistake as President-but neither does this resolutely honest biography indulge in the easy wisdom of hindsight. It is written throughout in real time, reflecting the world as TR saw it. By the final chapter, as the great “Teddy” prepares to quit the White House in 1909, it will be a hard-hearted reader who does not share the sentiment of Henry Adams: “The old house will seem dull and sad when my Theodore has gone.”

Edmund Morris was born and educated in Kenya and attended college in South Africa. He worked as an advertising copywriter in London before immigrating to the United States in 1968. His first book, The Rise of Theodore Roosevelt, won the Pulitzer Prize and the National Book Award in 1980. Its sequel, Theodore Rex, won the Los Angeles Times Book Prize for Biography in 2001. In between these two books, Morris became President Reagan’s authorized biographer and wrote the national bestseller Dutch: A Memoir of Ronald Reagan. He then completed his trilogy on the life of the twenty-sixth president with Colonel Roosevelt, also a bestseller, and has published Beethoven: The Universal Composer and This Living Hand and Other Essays. Edison is his final work of biography. He was married to fellow biographer Sylvia Jukes Morris for fifty-two years. Edmund Morris died in 2019.

Praise for The Rise of Theodore Roosevelt

“Magnificent . . . a sweeping narrative of the outward man and a shrewd examination of his character. . . . It is one of those rare works that is both definitive for the period it covers and fascinating to read for sheer entertainment. There should be a queue awaiting the next volume.”
-W. A. Swanberg, The New York Times Book Review

“Theodore Roosevelt, in this meticulously researched and beautifully written biography, has a claim on being the most interesting man ever to be President of this country.”
-Robert Kirsch, Los Angeles Times Book Review

“Spectacles glittering, teeth and temper flashing, high-pitched voice rasping and crackling, Roosevelt surges out of these pages with the force of a physical presence.”
-The Atlantic Monthly

“Morris’s book is beautifully written as well as thoroughly scholarly-clearly a masterpiece of American biography. . . . Hundreds of thousands will soon be reading this book . . . and will look forward, as I do, to Morris’s second volume.”
-Kenneth S. Davis, Worcester Sunday Telegram