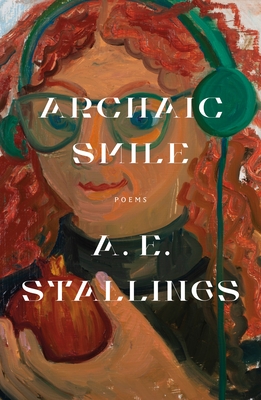 A new edition of A. E. Stallings's first book of poems, which was awarded the Richard Wilbur Award.

In Archaic Smile, by the Pulitzer Prize and National Book Critics Circle Award finalist A. E. Stallings, the poet couples poetic meditations on classic stories and themes with poems about the everyday, sometimes mundane occurrences of contemporary life (like losing an umbrella or fishing with one’s father), and she infuses the latter with the magic of myth and history. With the skill of a scholar and translator and the playful, pristine composition of a poet, Stallings bridges the gap between these two distant worlds.

Stallings “invigorates the old forms and makes them sing” (Meryl Natchez, ZYZZYVA) in her poetry, and the scope and origins of her talents are on full display in the acclaimed author's first collection. The poems of Archaic Smile are sung with a timeless, technically impeccable, and utterly true voice.

A. E. Stallings is the author of several books of poetry: Like, a Pulitzer Prize finalist; Olives, a finalist for the National Book Critics Circle Award; Hapax, winner of the Poets’ Prize and the American Academy of Arts and Letters’ Benjamin H. Danks Award; and Archaic Smile, winner of the Richard Wilbur Award. She has also published verse translations of Lucretius’s The Nature of Things and Hesiod’s Works and Days, as well as the Homeric epic The Battle Between the Frogs and the Mice. Stallings is a 2011 Guggenheim Fellow, a 2011 United States Artists Fellow, and a 2011 MacArthur Fellow. She lives in Athens, Greece.