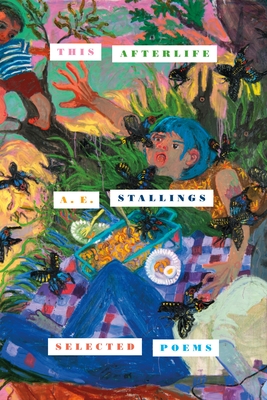 A selection of sharp, witty, and impeccably crafted poems from A. E. Stallings, the award-winning poet and translator.

This Afterlife: Selected Poems brings together poetry from A. E. Stallings’s four acclaimed collections, Archaic Smile, Hapax, Olives, and Like, as well as a lagniappe of outlier poems. Over time, themes and characters reappear, speaking to one another across years and experience, creating a complex music of harmony, dissonance, and counterpoint. The Underworld and the Afterlife, ancient history and the archaeology of the here and now, all slant rhyme with one another. Many of these poems unfold in the mytho-domestic sphere, through the eyes of Penelope or Pandora, Alice in Wonderland or the poet herself. Fulfilling the promise of the energy and sprezzatura of Stallings’s earliest collection, her later technical accomplishments rise to meet the richness of lived experience: of marriage and motherhood, of a life lived in another language and country, of aging and mortality. Her chosen home of Greece adds layers of urgency to her fascination with Greek mythology; living in an epicenter of contemporary crises means current events and ancient history are always rubbing shoulders in her poems.

Expert at traditional received forms, Stallings is also a poet of restless experiment, in cat’s-cradle rhyme schemes, nonce stanzas, supple free verse, thematic variation, and metaphysical conceits. The pleasure of these poems, fierce and witty, melancholy and wise, lies in a timeless precision that will outlast the fickleness of fashion.

A. E. Stallings is the author of several books of poetry: Like, a Pulitzer Prize finalist; Olives, a finalist for the National Book Critics Circle Award; Hapax, winner of the Poets’ Prize and the American Academy of Arts and Letters’ Benjamin H. Danks Award; and Archaic Smile, winner of the Richard Wilbur Award. She has also published verse translations of Lucretius’s The Nature of Things and Hesiod’s Works and Days, as well as the Homeric epic The Battle Between the Frogs and the Mice. Stallings is a 2011 Guggenheim Fellow, a 2011 United States Artists Fellow, and a 2011 MacArthur Fellow. She lives in Athens, Greece.

"A.E. Stallings is that rare poet who can write in a traditional form (sonnets! sestinas!) without letting the form squeeze the life out of the poem. “This Afterlife,” which selects from more than two decades of work, solidifies her virtuoso status. Much of the pleasure comes from her precise, imaginative eye." —Troy Jollimore, Washington Post

"Stallings’s work imagines the poet as an artisan, and her poems satisfy in the way a handblown glass bowl satisfies; they have heft and shape; they rest solidly in the palm." —David Orr, New York Times Book Review

"Perhaps America’s best living poet . . . In This Afterlife, [Stallings] has assembled her best work into an anthology that no one who still believes in poetry’s power to move, persuade, and surprise should miss." —Timothy Sandefur, The Objective Standard

"In the poems collected in This Afterlife—especially the ones set in the here and now—Stallings demonstrates that in the right poet’s hands, the putative everydayness of the hic et nunc can be transformed into something every bit as rich and strange as even the most ancient myths." —Ryan Ruby, The Nation

"Stallings’s formal ingenuity lends a music to her philosophically and narratively compelling verse. She [crafts] clever yet profound meditations on love, motherhood, language, and time. A particular pleasure is seeing certain personae—Persephone, Daphne, and Alice (of Wonderland)—recur throughout, accompanied by ever-deepening resonances." —The New Yorker

"Stallings’s new book, This Afterlife: Selected Poems, is a major event . . . Poems are either memorable or not, and This Afterlife is loaded with the real stuff, the right stuff, the kind of lines you remember." —Jason Guriel, Air Mail

"Technically assured . . . profound and disturbing . . . [This Afterlife] should introduce Stallings’s mastery to a wider public." —Graeme Richardson, The Times (UK)

"In the realm of contemporary formal poetry, Stallings is an Olympic-level athlete, and this mid-career retrospective demonstrates how she has been redefining the field for over two decades . . . This new career-spanning collection shows us both Stallings’ range and her depth, her intelligence, and her heart." —Erica Reid, The Colorado Review

"Aesthetic and intellectual pleasures are everywhere in this considerable work." —Publishers Weekly