I'm Not a Girl: A Transgender Story (Hardcover) 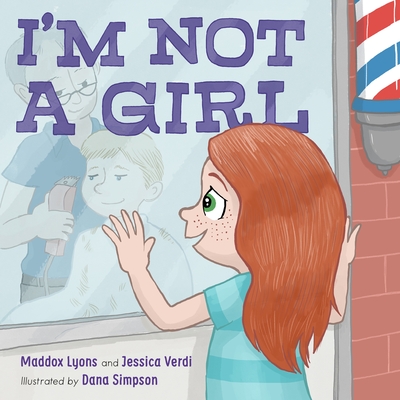 Based on a true transgender identity journey, the picture book I'm Not a Girl is an empowering story from writers Maddox Lyons and Jessica Verdi about a boy who is determined to be himself, illustrated by Dana Simpson.

Nobody seems to understand that Hannah is not a girl.

His parents ask why he won't wear the cute outfits they pick out. His friend thinks he must be a tomboy. His teacher insists he should be proud to be a girl.

But a birthday wish, a new word, and a stroke of courage might be just what Hannah needs to finally show the world who he really is.

Maddox Lyons is a transgender boy who lives in California with his parents, sister, two dogs, and two pet rats. He does advocacy and outreach with various LGBTQ+ organizations. Maddox loves drawing and writing, acting, figure skating, and getting lost in a good book.

Jessica Verdi is the author of several books for children and young adults—including And She Was, What You Left Behind, The Summer I Wasn’t Me, and My Life After Now. I'm Not a Girl is her debut picture book. Jess lives in New York with her family and loves traveling, seltzer, hot sauce, TV, theatre, vegetarian soup, leggings, flip-flops, and all animals.

Dana Simpson, a native of Gig Harbor, Washington, first caught the eyes of devoted comics readers with the internet strip Ozy and Millie. She then developed Phoebe and Her Unicorn, which is now syndicated in over 200 newspapers worldwide and has generated a robust publishing program.

Simpson’s books have appeared on the New York Times bestseller list, and won the Washington State Book Award and the Pacific Northwest Book Award. She lives with her husband and her cat in Santa Barbara, California.

"An important book that can serve as a conversation starter with gender-expansive children and as a tool for cis children to build empathy." —Booklist, starred review