This Body I Wore: A Memoir (Hardcover) 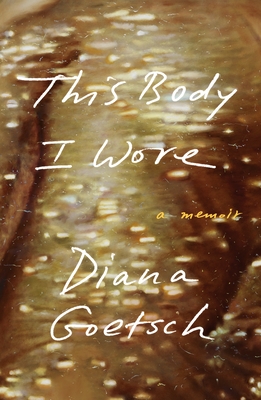 A captivating memoir of one woman’s long journey to late transition, as the trans community emerges alongside her.

“A universal and profound meditation on the price of authenticity.” —Jennifer Finney Boylan, author of She’s Not There and Good Boy

Long before Laverne Cox appeared on the cover of Time, far removed from drag and ballroom culture, there were countless trans women living and dying as men, most of whom didn’t even know they were trans. Diana Goetsch’s This Body I Wore chronicles one woman’s long journey to coming out, a path that runs parallel to the emergence of the trans community over the past several decades.

“How can you spend your life face-to-face with an essential fact about yourself and still not see it?” This is a question often asked of trans people, and a question that Goetsch, an award-winning poet and essayist, addresses with the power and complexity of lived reality. She brings us into her childhood, her time as a dynamic and beloved teacher at New York City’s Stuyvesant High School, and her plunge into the city’s crossdressing subculture in the 1980s and ’90s. Under cover of night, crossdressers risked their jobs and their safety to give expression to urges they could neither control nor understand. Many would become late transitioners, the Cinderellas of the trans community largely ignored by history.

Goetsch has written not a transition memoir, but rather a full account of a trans life, one both unusually public and closeted. All too often trans lives are reduced to before-and-after photos, but what if that before photo lasted fifty years?

Diana Goetsch is an American poet and essayist. Her poems have appeared widely, in The New Yorker, Poetry, The Gettysburg Review, Ploughshares, The Best American Poetry, and the Pushcart Prize anthology, and in the collections Nameless Boy and In America, among others. She also wrote the “Life in Transition” blog at The American Scholar. Her honors include fellowships from the National Endowment for the Arts, the New York Foundation for the Arts, and the New School, where she served as the Grace Paley Teaching Fellow. For twenty-one years Goetsch was a New York City public school teacher, at Stuyvesant High School and at Passages Academy in the Bronx, where she ran a creative writing program for incarcerated teens.

“Achingly beautiful . . . Goetsch has a poetic sensibility that illuminates without simplifying . . . This Body I Wore tenderly sketches out a history of the budding trans communities that developed in the late 20th century . . . Here is an excavated history that endures in the only way it could: in the fleeting memories of those who survived, who endured and who now, like Goetsch, thrive.”
—Manuel Betancourt, The New York Times Book Review

“Rarely does a book arrive so on time, blowing out the noise . . . A hilarious personal history of the full life as a trans woman. It’s never pedantic or even inspirational, which is exactly why it is.”
—Christopher Borrelli, The Chicago Tribune

“[This Body I Wore] not only chronicles [Goetsch’s] own transition but beautifully weaves together the story of the trans community over the course of her lifetime.”
—Jasmine Ting and Gretty Garcia, Cosmopolitan

“Exquisite . . . The hard-won wisdom [of] This Body I Wore offers a new generation of trans and nonbinary youth a guiding hand from a previous generation.”
—Catherine Hollis, BookPage (starred review)

“Goetsch fashions a brilliant and tapestried story of her late-in-life gender transition . . . A gorgeous self-portrait that defies categorization. The result obliterates binary confines around gender with breathtaking finesse.”
—Publishers Weekly

“Enthralling . . . Told with unique eloquence and tenderness . . . Hope blooms within these pages . . . A mesmerizing memoir [that] will appeal to fans of Melissa Febos and Roxane Gay.”
—Alana R. Quarles, Library Journal (starred review)

“Lyrical, harrowing, and wise. This Body I Wore, the story of one woman doing everything she can to avoid becoming herself, is a universal and profound meditation on the price of authenticity.”
—Jennifer Finney Boylan, author of She’s Not There and Good Boy

“Moving and vividly recalled, This Body I Wore conjures the pain of a life in search of language for who you are. Diana Goetsch has written a powerful testimony of the need for transgender acceptance.”
—Alex Marzano-Lesnevich, author of The Fact of a Body

“In This Body I Wore, Diana Goetsch the poet is present in every line of prose. The writing is spacious, beautiful, precise, and poignant. The reader floats through the sentences, entranced. ‘Magnificent’ is not an overstatement.”
—Thomas Peele, Pulitzer Prize–winning journalist and author of Killing the Messenger

“One of the most honest, unflappable, important books I’ve read in a long time. Diana Goetsch writes with lyricism and grace about her struggles and triumphs with family, love, and gender identity. Everyone should be required to read this book.”
—Ann Hood, author of Kitchen Yarns: Notes on Life, Love, and Food

“A book that many will cherish and few will forget. Some of us need another world, a world of the spirit, before we can live or become ourselves in this one, and Diana Goetsch has now shown us why.”
—Stephanie Burt, author of Don’t Read Poetry

“Clear, thoughtful, and deeply moving, This Body I Wore is an affirmation to anyone who has struggled to live an authentic life.”
—Ellen Bass, author of Indigo

“The perfect prescription for today’s world—compelling and lyrical in equal measures. A riveting read!”
—Danielle Ofri, MD, author of What Doctors Feel

“This Body I Wore is startling, humorous, haunting, and truly illuminating. I had chills when I began reading it and was floored by the end. A pitch-perfect memoir.”
—Laurie Gwen Shapiro, author of The Stowaway