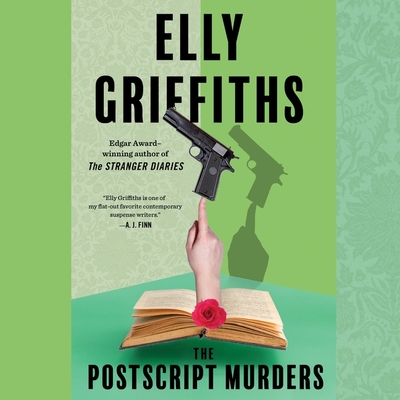 Murder leaps off the page when crime novelists begin to turn up dead in this intricate new novel by internationally best-selling author Elly Griffiths, a literary mystery perfect for fans of Anthony Horowitz and Agatha Christie.

The death of a ninety-year-old woman with a heart condition should not be suspicious. Detective Sergeant Harbinder Kaur certainly sees nothing out of the ordinary when Peggy’s caretaker, Natalka, begins to recount Peggy Smith’s passing.

But Natalka had a reason to be at the police station: while clearing out Peggy’s flat, she noticed an unusual number of crime novels, all dedicated to Peggy. And each psychological thriller included a mysterious postscript: PS: for PS. When a gunman breaks into the flat to steal a book and its author is found dead shortly thereafter—Detective Kaur begins to think that perhaps there is no such thing as an unsuspicious death after all.

And then things escalate: from an Aberdeen literary festival to the streets of Edinburgh, writers are being targeted. DS Kaur embarks on a road trip across Europe and reckons with how exactly authors can think up such realistic crimes . . .

ELLY GRIFFITHS is the author of the Ruth Galloway and Brighton mystery series and the stand-alone novels The Stranger Diaries and The Postscript Murders. She is a recipient of the Edgar Award for Best Novel, the Mary Higgins Clark Award and the CWA Dagger in the Library Award. She lives in Brighton, England.