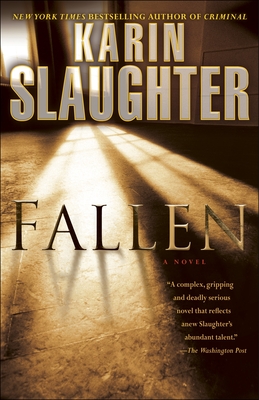 “An amazing effort . . . This is [Karin] Slaughter’s best book to date, and readers unfamiliar with her work will find this one a perfect place to begin.”—Associated Press

There’s no police training stronger than a cop’s instinct. Faith Mitchell’s mother isn’t answering her phone. Her front door is open. There’s a bloodstain above the knob. Everything Faith learned in the academy goes out the window when she charges into her mother’s house, gun drawn. She sees a man dead in the laundry room, a hostage situation in the bedroom. What she doesn’t see is her mother. When the hostage situation turns deadly, Faith is left with too many questions. She’ll need the help of her partner, Will Trent, and trauma doctor Sara Linton to get some answers. But Faith isn’t just a cop anymore, she’s a witness—and a suspect. To find her mother, Faith will have to cross the thin blue line and bring the truth to light—or bury it forever.

“An absolute master . . . Slaughter creates some wonderfully complex and mature female characters, a distinctive achievement in the world of thrillers.”—Chicago Tribune

“Slaughter has always known how to pace the suspense in her stellar crime novels, but she really outdoes herself here. . . . [She] reveals the heart and soul of her characters within a highly choreographed, unrelentingly suspenseful plot.”—Booklist (starred review)