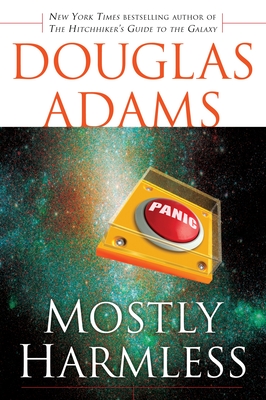 Now celebrating the 42nd anniversary of The Hitchhiker’s Guide to the Galaxy, soon to be a Hulu original series!

It’s easy to get disheartened when your planet has been blown up and the woman you love has vanished due to a misunderstanding about space/time. However, instead of being disheartened, Arthur Dent makes the terrible mistake of starting to enjoy life a bit—and immediately all hell breaks loose.

Hell takes a number of forms: there’s the standard Ford Prefect version, in the shape of an all-new edition of The Hitchhiker’s Guide to the Galaxy, and a totally unexpected manifestation in the form of a teenage girl who startles Arthur Dent by being his daughter when he didn’t even know he had one.

Can Arthur save the Earth from total multidimensional obliteration? Can he save the Guide from a hostile alien takeover? Can he save his daughter, Random, from herself? Of course not. He never works out exactly what is going on. Will you?

“Douglas Adams is a terrific satirist. . . . He is anything but harmless.”—The Washington Post Book World

Douglas Adams was born in 1952 and created all the various and contradictory manifestations of The Hitchhiker’s Guide to the Galaxy: radio, novels, TV, computer games, stage adaptations, comic book, and bath towel. He was born in Cambridge and lived with his wife and daughter in Islington, London, before moving to Santa Barbara, California, where he died suddenly in 2001.


“It is Mr. Adams’s genius to hurl readers into a plot that seems to go everywhere and nowhere, then suddenly drop the pieces into place, click, click, click, like tumblers in a lock. . . . Delightful.”—Baltimore Sun