Don't Forget Us Here: Lost and Found at Guantanamo (Hardcover) 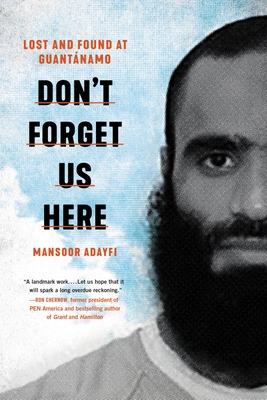 “Amazing book! And will be an eye-opener for many.” -Margaret Atwood

This moving, eye-opening memoir of an innocent man detained at Guantánamo Bay for fifteen years tells a story of humanity in the unlikeliest of places and an unprecedented look at life at Guantánamo.

At the age of 18, Mansoor Adayfi left his home in Yemen for a cultural mission to Afghanistan. He never returned. Kidnapped by warlords and then sold to the US after 9/11, he was disappeared to Guantánamo Bay, where he spent the next 14 years as Detainee #441.
Don't Forget Us Here tells two coming-of-age stories in parallel: a makeshift island outpost becoming the world's most notorious prison and an innocent young man emerging from its darkness. Arriving as a stubborn teenager, Mansoor survived the camp's infamous interrogation program and became a feared and hardened resistance fighter leading prison riots and hunger strikes. With time though, he grew into the man nicknamed "Smiley Troublemaker": a student, writer, advocate, and historian. While at Guantánamo, he wrote a series of manuscripts he sent as letters to his attorneys, which he then transformed into this vital chronicle, in collaboration with award-winning writer Antonio Aiello. With unexpected warmth and empathy, Mansoor unwinds a narrative of fighting for hope and survival in unimaginable circumstances, illuminating the limitlessness of the human spirit. And through his own story, he also tells Guantánamo's story, offering an unprecedented window into one of the most secretive places on earth and the people—detainees and guards alike—who lived there with him.   Twenty years after 9/11, Guantánamo remains open, and at a moment of due reckoning, Mansoor Adayfi helps us understand what actually happened there—both the horror and the beauty—a stunning record of an experience we cannot afford to forget.

Mansoor Adayfi is a writer and former Guantánamo Bay Prison Camp detainee, held for over 14 years without charges as an enemy combatant. Adayfi was released to Serbia in 2016, where he struggles to make a new life for himself and to shed the designation of a suspected terrorist. Today, Mansoor Adayfi is a writer and advocate with work published in the New York Times, including a column the Modern Love column "Taking Marriage Class at Guantánamo" and the op-ed "In Our Prison by the Sea." He wrote the introduction, "Ode to the Sea: Art from Guantánamo Bay," for the 2017-2018 exhibition of prisoners' artwork at the John Jay College of Justice in New York City, and contributed to the scholarly volume, Witnessing Torture, published by Palgrave. In 2018, Adayfi participated in the creation of the award-winning radio documentary The Art of Now for BBC radio about art from Guantánamo and the CBC podcast Love Me, which aired on NPR's Snap Judgment. Regularly interviewed by international news media about his experiences at Guantánamo and life after, he was also featured in Out of Gitmo, a mini-documentary and part of PBS's Frontline series. Work from his memoir was recently featured at a public reading at the Edinburgh Book Festival along with work by Guantánamo Diary author Mohamedou Ould Slahi. His graphic narrative, Caged Lives, was by The Nib and will be included in the anthology Guantanamo Voices. In 2019, he won the Richard J. Margolis Award for nonfiction writers of social justice journalism.

Antonio Aiello is a writer, editor, and storyteller working in print, digital, and broadcast formats. He worked closely with Mansoor to help develop the manuscripts written at Guantánamo into Don’t Forget Us Here. Together, they are working to develop a TV show inspired by the book as Fellows in the Sundance Institute’s prestigious Episodic Lab.

“Searing… a starkly human dispatch from the messy and often unheard receiving end of the war on terror.”—The New York Times

"In this landmark work, Mansoor Adayfi gives us a guided tour through the nightmarish landscape of Guantánamo. He tells a tale of both casual cruelty and organized sadism that should make every American politician redden with shame. But this memoir offers much more than just a gruesome portrait of a bureaucracy gone berserk, for it describes the fierce resistance and ultimate redemption of an innocent Yemeni man consigned to a hellish prison. Let us hope that Don't Forget Us Here will spark a long overdue reckoning with the horrors of Guantánamo and its many victims."—Ron Chernow, former president of PEN America and bestselling author of Grant and Hamilton

"This is a wholly enthralling, relentlessly enraging, and unexpectedly funny book about one man caught in the absurdist world of the War on Terror. With his mordant wit and astonishing perseverance, Mansoor is impossible not to root for. This is a contemporary Unbroken with vital lessons for the American military-intelligence complex, exposing how an ostensibly moral nation becomes a state sponsor of torture."—Dave Eggers, Pulitzer Prize finalist and winner of the Dayton Literary Peace Prize

"An incredible story! I am grateful to this joyously heartbreaking book for reminding me of what it means to be not just human, but humane."
—Azar Nafisi, bestselling author of Reading Lolita in Tehran

“It took courage to live his life; it took more courage yet to write his story.  It takes courage to read it, too, but that is amply rewarded by the author’s generosity of spirit, which informs every word of his memoir. Only a few books change history; this might be one of them. Let us hope so.”—Andrew Solomon, National Book Award-winning author of The Noonday Demon

“Amazing book! & will be an eye-opener for many.”

"This unvarnished memoir will grip readers and anger them; a decisive contribution to the continuing reappraisal of the wars in Iraq and Afghanistan."—Library Journal

"Mansoor’s plight is unfathomable, but his strength most certainly is enviable. His powerful, unforgettable story is a must read in every way."—Booklist

"[Adayfi is] a charming, exuberant soul, and his humor and flights of fancy come through in even the book’s most hard-to-read moments."—The Intercept

"A profoundly moving and immensely important tribute to the intelligence, resilience, and humanity with which its author, Mansoor Adayfi, survived fourteen years as a detainee in the notorious Guantanamo prison camp."—Francine Prose, bestselling author of Lovers at the Chameleon Club, Paris 1932

"Both a record of what was done to detainees and a triumphant boast about how they survived. We should read it to bear witness to what was done in our name — and to gain inspiration for what we need to do to ensure that this injustice never happens again."—Los Angeles Review of Books

"After years of hearing and reading only the ‘official’ version of his story, as told by his captors, at last Mansoor himself speaks. Speaking at all after such experiences, which included 14 years of the most serious human rights violations and daily humiliations designed to break the human spirit, is a victory. Speaking as Mansoor does here, of the struggle of Guantánamo's prisoners to assert their humanity, turns the official story about these men on its head, and shows Guantánamo for what it is: a terrible shame and a pointless failure."—Mohamedou Ould Slahi, bestselling author of Guantánamo Diary

"A window of stunning humanity into a place meant to be kept forever secret."

—Melissa Fleming, UN Under-Secretary-General for Global Communications and author of A Hope More Powerful than the Sea

"A blistering, eloquent indictment of Guantánamo. Mansoor Adayfi vividly describes the abuses committed there and he writes powerfully about the decade and half he spent there."—Peter Bergen, bestselling author of The Rise and Fall of Osama bin Laden and The Longest War

"Don’t Forget Us Here may be one of the most shocking books you’ll ever read, but not for the reasons you might expect. What’s most shocking about this extraordinary book is Adayfi’s enormous capacity to resist his captors with uncommon creativity, dignity, and even humor."—Moustafa Bayoumi, author of How Does It Feel to Be a Problem?: Being Young and Arab in America

“A riveting, illuminating account of Guantánamo from a Muslim perspective.”—Jonathan Hansen, author of Guantánamo: An American History