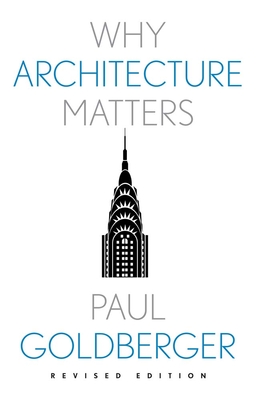 A classic work on the joy of experiencing architecture, with a new afterword reflecting on architecture’s place in the contemporary moment

“Architecture begins to matter,” writes Paul Goldberger, “when it brings delight and sadness and perplexity and awe along with a roof over our heads.” In Why Architecture Matters, he shows us how that works in examples ranging from a small Cape Cod cottage to the vast, flowing Prairie houses of Frank Lloyd Wright, from the Lincoln Memorial to the Guggenheim Bilbao. He eloquently describes the Church of Sant’Ivo in Rome as a work that “embraces the deepest complexities of human imagination.”

In his afterword to this new edition, Goldberger addresses the current climate in architectural history and takes a more nuanced look at projects such as Thomas Jefferson’s academical village at the University of Virginia and figures including Philip Johnson, whose controversial status has been the topic of much recent discourse. He argues that the emotional impact of great architecture remains vital, even as he welcomes the shift in the field to an increased emphasis on social justice and sustainability.

Paul Goldberger is the Joseph Urban Professor of Design at the New School, a contributing editor at Vanity Fair, and the former architecture critic for the New Yorker and the New York Times, where his criticism won the Pulitzer Prize.