Queer Wars: The New Gay Right and Its Critics (Paperback) 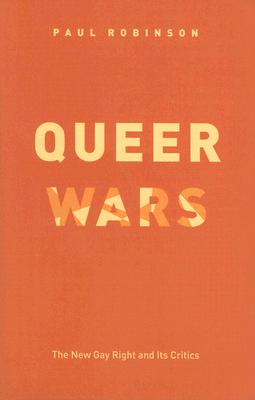 By Paul Robinson
Email or call for price
Special Order

From the 1969 rebellion at Stonewall to recent battles over same-sex marriage, gay liberation in the United States has always been closely associated with the political left. But in recent years, gay liberation has taken a dramatic turn toward the right. With Queer Wars, celebrated historian of gay culture Paul Robinson offers the first extended consideration of gay conservatism and the trenchant critics who espouse its positions, including Bruce Bawer, Andrew Sullivan, Michelangelo Signorile, and Gabriel Rotello.

The emergence of a conservative intellectual tradition is arguably the most remarkable development in the gay world over the past decade. Timely and rich in suggestive propositions, Queer Wars will prove to be essential reading for anyone interested in gay culture and contemporary politics.

“This lucid analysis of conservative gay politics equally illuminates the positions of its left and liberal critics. Queer Wars is a most useful introduction to debates about the politics of sexuality in America today.”—Jonathan Ned Katz, author of Love Stories

Paul Robinson is the Richard W. Lyman Professor in the Humanities at Stanford University. He is the author of a number of books, including Opera, Sex, and Other Vital Matters and Gay Lives: Homosexual Autobiography from John Addington Symonds to Paul Monette, both published by the University of Chicago Press.