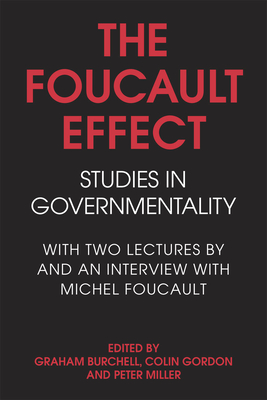 Based on Michel Foucault's 1978 and 1979 lectures at the Collège de France on governmental rationalities and his 1977 interview regarding his work on imprisonment, this volume is the long-awaited sequel to Power/Knowledge. In these lectures, Foucault examines the art or activity of government both in its present form and within a historical perspective as well as the different ways governmentality has been made thinkable and practicable.

Foucault's thoughts on political discourse and governmentality are supplemented by the essays of internationally renowned scholars. United by the common influence of Foucault's approach, they explore the many modern manifestations of government: the reason of state, police, liberalism, security, social economy, insurance, solidarity, welfare, risk management, and more. The central theme is that the object and the activity of government are not instinctive and natural things, but things that have been invented and learned.

The Foucault Effect analyzes the thought behind practices of government and argues that criticism represents a true force for change in attitudes and actions, and that extending the limits of some practices allows the invention of others. This unique and extraordinarily useful collection of articles and primary materials will open the way for a whole new set of discussions of the work of Michel Foucault as well as the status of liberalism, social policy, and insurance.

Graham Burchell, a contributor to Radical Philosophy and Ideology and Consciousness, is a freelance researcher and translator. Colin Gordon, a former research assistant to Michel Foucault at the College de France, is the editor and translator of Foucault's Power/Knowledge and translator of The Philosophical Imaginary by Michelle LeDoeuff. Peter Miller serves as convener of the Department of Accounting and Finance at the London School of Economics and Political Science.