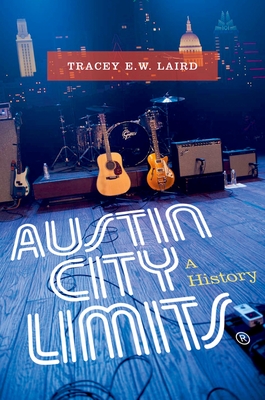 Austin City Limits is the longest running musical showcase in the history of television, and it still captivates audiences forty years after its debut on the air. From Willie Nelson's legendary pilot show and his fourteen magical episodes running through the years to Season 35, to mythical performances of BB King and Stevie Ray Vaughn, to repeat appearances from Chet Atkins, Bonnie Raitt and Ray Charles, and recent shows with Mumford & Sons, Arcade Fire and The Decemberists, the show has defined popular roots music and indie rock. This is why country rocker Miranda Lambert -- relatively unknown when she taped a show almost a decade ago -- gushed to the studio audience, Now I know I have arrived Austin City Limits: A History tells this remarkable story. With unprecedented access behind the scenes at the tapings of shows with Gillian Welch and David Rawlings, Mos Def, Wilco, and many more, author Tracey Laird tells the story of this landmark musical showcase whose history spans dramatic changes in the world of television, the expansion of digital media, and the ways in which we experience music. Beginning as a simple weekly broadcast, it is today a multifaceted brand in contemporary popular music, existing simultaneously as a program available for streaming, a presence on Twitter and other social media, a major music festival, and a state-of-the-art performance venue. Laird explores the ways in which the show's evolution has driven, and been driven by, both that of Austin as the Live Music Capital of the World, and of U.S. public media as a major player in the dissemination and sponsorship of music and culture. Engagingly written and packed with anecdotes and insights from everyone from the show's producers and production staff to the musicians themselves, Austin City Limits: A History gives us the best seat in the house for this illuminating look at a singular presence in American popular music. Timed to publish with the airing of Austin City Limits 2014 -- the 40th anniversary celebratory broadcast featuring an all-star lineup of musicians including the Foo Fighters, Willie Nelson, Sheryl Crow, and others -- here is a book for all fans of this beloved music institution.

Tracey E. W. Laird is Professor of Music and Chair at Agnes Scott College in Decatur, Georgia. She is the author of Louisiana Hayride: Radio and Roots Music Along the Red River and co-editor with Kip Lornell of Shreveport Sounds in Black and White.