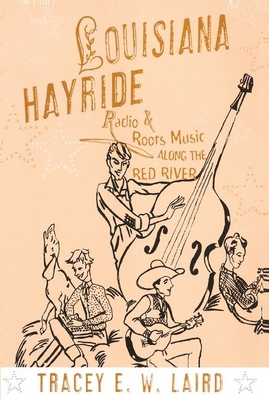 On a Saturday night in 1948, Hank Williams stepped onto the stage of the Louisiana Hayride and sang Lovesick Blues. Up to that point, Williams's yodeling style had been pigeon-holed as hillbilly music, cutting him off from the mainstream of popular music. Taking a chance on this untried
artist, the Hayride--a radio barn dance or country music variety show like the Grand Ole Opry--not only launched Williams's career, but went on to launch the careers of well-known performers such as Jim Reeves, Webb Pierce, Kitty Wells, Johnny Cash, and Slim Whitman. Broadcast from Shreveport, Louisiana, the local station KWKH's 50,000-watt signal reached listeners in over 28 states and lured them to packed performances of the Hayride's road show. By tracing the dynamic history of the Hayride and its sponsoring station, ethnomusicologist Tracey Laird reveals the
critical role that this part of northwestern Louisiana played in the development of both country music and rock and roll. Delving into the past of this Red River city, she probes the vibrant historical, cultural, and social backdrop for its dynamic musical scene. Sitting between the Old South and
the West, this one-time frontier town provided an ideal setting for the cross-fertilization of musical styles. The scene was shaped by the region's easy mobility, the presence of a legal red-light district from 1903-17, and musical interchanges between blacks and whites, who lived in close
proximity and in nearly equal numbers. The region nurtured such varied talents as Huddie Ledbetter, the king of the twelve-string guitar, and Jimmie Davis, the two term singing governor of Louisiana who penned You Are My Sunshine. Against the backdrop of the colorful history of Shreveport, the unique contribution of this radio barn dance is revealed. Radio shaped musical tastes, and the Hayride's frontier-spirit producers took risks with artists whose reputations may have been shaky or whose styles did not neatly fit musical
categories (both Hank Williams and Elvis Presley were rejected by the Opry before they came to Shreveport). The Hayride also served as a training ground for a generation of studio sidemen and producers who steered popular music for decades after the Hayride's final broadcast. While only a few years
separated the Hayride appearances of Hank Williams and Elvis Presley--who made his national radio debut on the show in 1954--those years encompassed seismic shifts in the tastes, perceptions, and self-consciousness of American youth. Though the Hayride is often overshadowed by the Grand Ole Opry in
country music scholarship, Laird balances the record and reveals how this remarkable show both documented and contributed to a powerful transformation in American popular music.