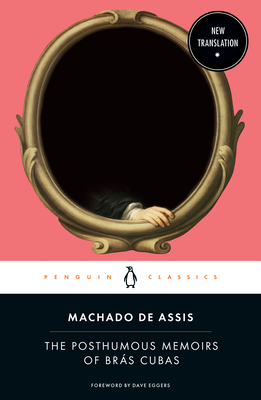 "One of the wittiest, most playful, and . . . most alive and ageless books ever written." --Dave Eggers, The New Yorker

A revelatory new translation of the playful, incomparable masterpiece of one of the greatest Black authors in the Americas

The mixed-race grandson of ex-slaves, Machado de Assis is not only Brazil's most celebrated writer but also a writer of world stature, who has been championed by the likes of Philip Roth, Susan Sontag, Allen Ginsberg, John Updike, and Salman Rushdie. In his masterpiece, the 1881 novel The Posthumous Memoirs of Brás Cubas (translated also as Epitaph of a Small Winner), the ghost of a decadent and disagreeable aristocrat decides to write his memoir. He dedicates it to the worms gnawing at his corpse and tells of his failed romances and halfhearted political ambitions, serves up harebrained philosophies, and complains with gusto from the depths of his grave. Wildly imaginative, wickedly witty, and ahead of its time, the novel has been compared to the work of everyone from Cervantes to Sterne to Joyce to Nabokov to Borges to Calvino, and has influenced generations of writers around the world.

This new English translation is the first to include extensive notes providing crucial historical and cultural context. Unlike other editions, it also preserves Machado's original chapter breaks--each of the novel's 160 short chapters begins on a new page--and includes excerpts from previous versions of the novel never before published in English.

For more than seventy-five years, Penguin has been the leading publisher of classic literature in the English-speaking world. With more than 2,000 titles, Penguin Classics represents a global bookshelf of the best works throughout history and across genres and disciplines. Readers trust the series to provide authoritative texts enhanced by introductions and notes by distinguished scholars and contemporary authors, as well as up-to-date translations by award-winning translators.

Flora Thomson-DeVeaux (translator/introducer) is a translator, writer, and researcher who studied Spanish and Portuguese at Princeton University and earned a PhD in Portuguese and Brazilian studies from Brown University. She lives in Rio de Janeiro.

Dave Eggers (foreword) is the bestselling author of more than ten books, including A Hologram for the King, a finalist for the National Book Award; What Is the What, a finalist for the National Book Critics Circle Award; and A Heartbreaking Work of Staggering Genius, a finalist for the Pulitzer Prize. His work has been translated into more than forty languages, and his nonfiction and journalism have appeared The New Yorker, The Best American Travel Writing, and The Best American Essays. The founder of McSweeney's, a member of the American Academy of Arts and Letters, and the winner of the Dayton Literary Peace Prize, Eggers lives in Northern California with his family.

“Is it possible that the most modern, most startlingly avant-garde novel to appear this year was originally published in 1881? . . . Machado’s book represents the moment when the novel learned to dance. . . . Flora Thomson-DeVeaux’s edition is a gift to scholars. Her introductory essay and notes offer a rich guide to Machado’s work and world—and an important corrective. . . . [Brás Cubas is] superb company.” —The New York Times

“Brilliant . . . Charming . . . Digressive, playful, and irreverent . . . Thomson-DeVeaux’s [translation] comes with thirty pages of helpful endnotes that offer explanations of Brás’s arcane literary and historical allusions, as well as deleted passages from early versions of the novel.” ―The New York Review of Books

“The best novel I have read in 2020 . . . [It] boasts a perceptive foreword by Dave Eggers. . . . In Thomson-DeVeaux’s hands, the text . . . rolls (often) merrily along, playful, acid, and with a liveliness impressive in an ‘author’ so dead. . . . Thomson-DeVeaux provides detailed and highly informative endnotes.” ―Andrew Stuttaford, The New Criterion

“[A] dizzying novel, so layered and duplicitous as to be a translator’s dream . . . The intensity of Thomson-DeVeaux’s personal engagement lifts her searching introduction and prolific endnotes. She also provides an essential bibliography. . . . Her deep research . . . has made all the difference to accuracy, while enriching the paratextual material. . . . The hope is that many more readers may come across this sui generis master, perched on his almost disconnected branch of the literary tree.” ―The Baffler

“[An] extraordinary book, a milestone in Latin American literary history . . . Outrageously funny and volubly impertinent . . . Not only does Thomson-DeVeaux explore the issue of Brazilian racial dynamics in her excellent introduction and endnotes, her attention to these themes is also reflected in her translation choices . . . [and] a deep engagement with social reality. . . . [In her] careful and meticulous translation . . . Thomson-DeVeaux brings across the unique rhythm of Machado’s prose, reproducing Brás’s clipped, highly punctuated syntax with great care. The peculiar tension between the sophistication of the style and the cruel absurdity of the content is maintained in English, allowing a unique 19th-century proto-Modernist Brazilian voice to be heard at full volume, in all its subtleties.” ―Los Angeles Review of Books

“Brilliantly idiosyncratic . . . Cubas endows every episode with scintillating digressions on history and literature along with gentle mockery of his own hypocrisy and pretensions. Thomson-DeVeaux’s limpid translation captures the charm and immediacy of de Assis. . . . His masterpiece reads like the best of dreams.” —Publishers Weekly, starred review

“A newcomer with superb talents who researches and writes as if she were a seasoned veteran . . . translator Thomson-DeVeaux has . . . a contagious love for Machado’s novel. . . . Her introduction, notes on the translation and endnotes, and the extensive endnotes themselves are all delightful. She really did her homework and demonstrates a true dedication to her purpose. . . . Her version maintains the page breaks for all chapters. . . . No one else does that. And given the typographical play in the book, it does make a difference. . . . [A] winning translation.” ―Words Without Borders

“A glittering masterwork and an unmitigated joy to read . . . It is wholly original and unlike anything other than the many books that came after it and seem to have knowingly or not borrowed from it. . . . This translation . . . is a glorious gift to the world, because it sparkles, because it sings, because it’s very funny and manages to capture Machado’s inimitable tone, at once mordant and wistful, self-lacerating and romantic.” —Dave Eggers, from the Foreword

“Not only are the endnotes impressively accurate and useful for foreign readers, but also the translation does honor to Machado de Assis’s style as it keeps an eye out for multiple layers of meaning and slippery descriptions, respecting the contours of a novel that, even as it feigns nonchalance, is in fact stunningly profound. . . . Thomson-DeVeaux is able to preserve the elegance, humor, sincerity, and roguishness of this masterpiece of Brazilian literature.” —Pedro Meira Monteiro, Princeton University

“Thomson-DeVeaux’s version flows better than any of the other translations and deals quite skillfully with some of the challenging nuances of the original. . . . An obvious difference between Thomson-DeVeaux’s translation and the previously published versions is the extensive apparatus of notes, which give very valuable cultural, historical, and literary information and will make the translation a valuable resource not just for those who must read the novel in English, but also for those with a reading knowledge of Portuguese.” —Paul Dixon, Purdue University

“Thomson-DeVeaux’s translation keeps Machado de Assis’s ambiguity in English and is thus much closer to his actual writing than previous translations. . . . And it respects a ‘secret’ of Machado’s literature—to wit, both its colloquial diction and the ability to produce virtually endless possible interpretations resorting to a disconcerting ‘simplicity’ in his writing manners. . . . Thomson-DeVeaux has succeeded with unparalleled elegance and precision.” —João Cezar de Castro Rocha, Rio de Janeiro State University

Acclaim for The Posthumous Memoirs of Brás Cubas

“One of those thrillingly original, radically skeptical books that will always impress readers with the force of private discovery.” —Susan Sontag

“A masterpiece of Epicurean irony.” —The New York Times

“One of those books which we call definitive. It is there, complete, done: a study of ironic disillusionment couched in the most delicate suavity of despair.” —The New York Times Book Review

“A tour de force of surprising modernity compared with the grim realism of the time. The Posthumous Memoirs of Brás Cubas displays a distinct voice—quiet, friendly, even cozy, yet full of wit and inventiveness. Cervantes comes to mind as a comparison, though the voice of Laurence Sterne (whom Machado acknowledges) can also be heard. . . . This is the language of visions spoken by a rogue who is trying to bedazzle and deceive the reader.” —The Wall Street Journal

“Belongs to a long line of brilliantly odd and (relatively) outrageous works like Laurence Sterne’s Tristram Shandy and Xavier de Maistre’s Voyage Around My Room . . . A very great novel indeed.” —The Nation

“The greatest writer ever produced in Latin America.” —Susan Sontag

“A great ironist, a tragic comedian . . . In his books, in their most comic moments, he underlines the suffering by making us laugh.” —Philip Roth

“Machado is a miracle. . . . The most brilliant star in the sky of nineteenth-century Iberian-American novels.” —Carlos Fuentes

“One of the few writers who not only received a state funeral, but actually deserved it.” —Louis de Bernières

“The creator of a tremendous oeuvre and an inimitable sense of humor.” —José Saramago

“A great writer who chose to use deadly humor where it would be least expected to convey his acute powers of observation and his penetrating insights into psychology. In superbly funny books he described the abnormalities of alienation, perversion, domination, cruelty and madness. He deconstructed empire with a thoroughness and an esthetic equilibrium that place him in a class by himself.” —The New York Times

“One of the world’s great writers.” —The New York Review of Books

“Machado de Assis wrote some of the most deliriously adventurous fiction of the last century.” —Lingua Franca

“No satirist, not even Swift, is less merciful in his exposure of the pretentiousness and the hypocrisy that lurk in the average good man and woman. Machado, in his deceptively amiable way, is terrifying.” —The New Republic

“Machado de Assis . . . is held by many to be not only Brazil’s greatest writer but on a par with Henry James, Flaubert and Hardy [with] his enchantingly digressive style, sly humour and merciless exposure of hypocrisy and pretentiousness.” —The Guardian