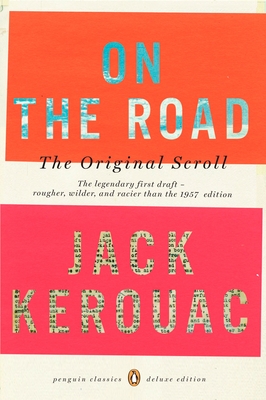 The legendary 1951 scroll draft of On the Road, published as Kerouac originally composed it

IN THREE WEEKS in April of 1951, Jack Kerouac wrote his first full draft of On the Road—typed as a single-spaced paragraph on eight long sheets of tracing paper, which he later taped together to form a 120-foot scroll. A major literary event when it was published in Viking hardcover in 2007, this is the uncut version of an American classic—rougher, wilder, and more provocative than the official work that appeared, heavily edited, in 1957. This version, capturing a moment in creative history, represents the first full expression of Kerouac’s revolutionary aesthetic.

Jack Kerouac was born in Lowell, Massachusetts, in 1922, the youngest of three children in a Franco-American family. He attended local Catholic and public schools and won a scholarship to Columbia University in New York City, where he first met Neal Cassady, Allen Ginsberg, and William S. Burroughs. His first novel, The Town and the City, appeared in 1950, but it was On the Road, published in 1957 and memorializing his adventures with Neal Cassady, that epitomized to the world what became known as the “Beat generation” and made Kerouac one of the most best-known writers of his time. Publication of many other books followed, among them The Dharma Bums, The Subterraneans, and Big Sur. Kerouac considered all of his autobiographical fiction to be part of “one vast book,” The Duluoz Legend. He died in St. Petersburg, Florida, in 1969, at the age of forty-seven.