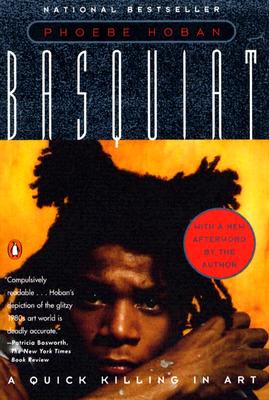 By Phoebe Hoban
Email or call for price
Special Order

Painter Jean-Michel Basquiat was the Jimi Hendrix of the art world: in less than a decade he went from being a teenage graffiti writer to an international art star; he was dead of a drug overdose at age twenty-seven. Phoebe Hoban's Basquiat, the first biography of this charismatic figure, charts the trajectory from the artist's troubled childhood to his volatile passage through the white art world of dealers and nouveau-riche collectors, chronicling the meteoric success and overnight burnout that made him an instant art-world myth.

As much the portrait of an era as the portrait of an artist, Basquiat is an incisive expose of the eighties art market that paints a vivid picture of the rise and fall of the graffiti movement, the East Village art scene, and the out-of-control auction houses. Ten years after the artist's death, Basquiat resurrects both the painter and his time.