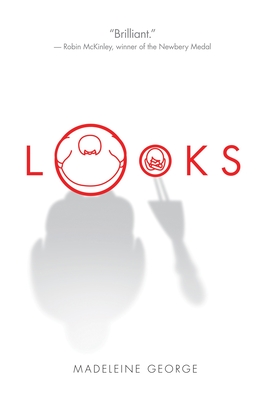 By Madeleine George
Email or call for price
Special Order

“Looks ostensibly is about two high school girls, each with an eating disorder, one with near-morbid obesity and one tending toward anorexia. Their slowly converging lives allow George to explore the concept of vision and visibility in an incisive and original manner. In the end, the book suggests the only way to become invisible to the unwanted tyranny of hostile looks is to be truly seen. A challenging and beautiful book.”
— Kenny Brechner, Devaney, Doak & Garrett Booksellers, Inc., Farmington, ME

Despite her massive size, Meghan Ball is the most invisible person at Valley Regional High. People say things in front of her as if she doesn?t exist. And most of the time, she feels like she doesn?t? until Meghan sees Aimee Zorn. Aimee is as skinny as Meghan is large, and as outwardly angry as Meghan is inwardly sad. Meghan instantly recognizes a kindred spirit in Aimee, another person using her body to say what she cannot. Alone, they are powerless, but together, Meghan and Aimee join forces to get sweet revenge against the one girl in school who hurt them both.

Madeleine George is an award-winning playwright and a founding member of the playwriting collective 13P. She is also the director of the Bard College satellite campus at Bayview Women’s Correctional Facility in Manhattan. Ms. George lives in New York City.