On the Way Home: The Diary of a Trip from South Dakota to Mansfield, Missouri, in 1894 (Little House Nonfiction) (Paperback) 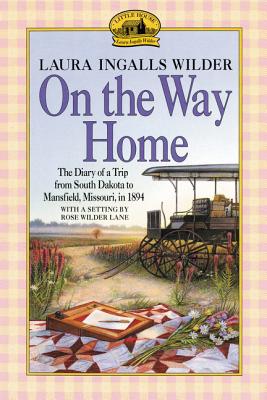 A detailed diary from the author of the beloved Little House series, chronicling her journey with her family from South Dakota to Missouri.

In 1894, Laura Ingalls Wilder, her husband, Almanzo, and their daughter, Rose, packed their belongings into their covered wagon and set out on a journey from De Smet, South Dakota, to Mansfield, Missouri. They heard that the soil there was rich and the crops were bountiful—it was even called "the Land of the Big Red Apple." With hopes of beginning a new life, the Wilders made their way to the Ozarks of Missouri.

During their journey, Laura kept a detailed diary of events: the cities they passed through, the travelers they encountered on the way, the changing countryside and the trials of an often difficult voyage. Laura's words, preserved in this book, are a fascinating account of life and travel at the turn of the twentieth century, and reveal Laura’s inner thoughts as she traveled with her family in search of a new home in Mansfield, where Laura would write her Little House books.

Laura Ingalls Wilder (1867–1957) was born in a log cabin in the Wisconsin woods. With her family, she pioneered throughout America’s heartland during the 1870s and 1880s, finally settling in Dakota Territory. She married Almanzo Wilder in 1885; their only daughter, Rose, was born the following year. The Wilders moved to Rocky Ridge Farm at Mansfield, Missouri, in 1894, where they established a permanent home. After years of farming, Laura wrote the first of her beloved Little House books in 1932. The nine Little House books are international classics. Her writings live on into the twenty-first century as America’s quintessential pioneer story.