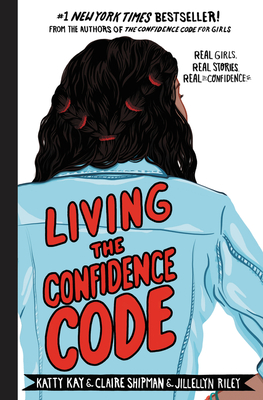 New from the New York Times, USA Today, and Wall Street Journal bestselling authors of The Confidence Code for Girls!

The best way to understand confidence is to see it in action. That’s why bestselling authors Katty Kay, Claire Shipman, and JillEllyn Riley have collected 30 true stories of real girls, pursuing their passions, struggling and stumbling, but along the way figuring out how to build their own special brand of confidence.

From Bali to Brazil, South Africa to Seattle, Australia to Afghanistan, these girls took risks, doubted themselves, and sometimes failed. But they also hung in there when things got hard. Along the way they discovered what matters to them: everything from protesting contaminated water to championing inclusive books to the accessibility of girls’ basketball shoes, and so much more.

Different goals, different stories, different personalities, all illustrating the multitude of ways to be confident in the world.

Packed with photos, graphic novel strips, and engaging interviews, Living the Confidence Code proves that no matter who you are, or how old you are, nothing is out of reach when you decide to try. Join this growing global community of powerful girls and imagine—what would you like to do, once you tap into your confidence? How will you write your story?

Katty Kay is the anchor of BBC World News America, based in Washington, DC. She is also a frequent contributor to Meet the Press and Morning Joe and a regular guest host for The Diane Rehm Show on NPR. She’s the author, along with Claire Shipman, of two New York Times bestsellers, Womenomics: Work Less, Achieve More, Live Better and The Confidence Code: The Science and Art of Self-Assurance—What Women Should Know. In addition to her work on women’s issues, Katty has covered the Clinton administration sex scandal, four presidential elections, and the wars in Kosovo, Afghanistan, and Iraq. She was at the Pentagon just twenty minutes after a hijacked plane flew into the building on 9/11—one of her most vivid journalistic memories is of interviewing soldiers still visibly shaking from the attack. Katty grew up all over the Middle East, where her father was posted as a British diplomat. She studied modern languages at Oxford and is a fluent French and Italian speaker with some “rusty Japanese.” Katty juggles her journalism with raising four children with her husband, a consultant. Visit Katty online at www.theconfidencecode.com.

Claire Shipman is a journalist, author, and public speaker. She’s the author, along with Katty Kay, of two New York Times bestsellers, Womenomics: Work Less, Achieve More, Live Better and The Confidence Code: The Science and Art of Self-Assurance—What Women Should Know. Before turning to writing, Claire spent almost three decades as an award-winning television journalist. For the last fourteen years, Claire was a regular contributor to Good Morning America and other national broadcasts for ABC News. Before that, she served as White House correspondent for NBC News, where she regularly reported on presidential policy and politics for NBC Nightly News and Today. Prior to that, she worked for CNN for a decade, covering the White House, and she was also posted in Moscow for five years, reporting on the fall of the Soviet Union. Claire’s coverage from Moscow helped CNN earn a National Headliners Award and a coveted Peabody Award. She received a DuPont Award and an Emmy Award for coverage of the 1989 Tiananmen Square student uprising, as well as a DuPont Award for CNN’s coverage of the 1995 Oklahoma City bombing. She graduated from Columbia College and later earned a master’s degree from the School of International Affairs there. She’s now a member of Columbia’s board of trustees. She lives in Washington, DC, with her husband and their two children and three dogs. Visit Claire online at www.theconfidencecode.com.

JillEllyn Riley is a writer and editor with extensive experience in crafting and telling stories. She’s worked with bestselling, innovative children’s authors, as well as on nonfiction and fiction for adults. Her cowritten middle grade series is The Saturday Cooking Club. JillEllyn lives in Brooklyn, New York, with her husband, two sons, and canine ally Stella.

"The girls you meet in Living the Confidence Code are changemakers. They are making the world a better place. We can all learn so much from their bravery and resilience."
— Girls Who Code founder Reshma Saujani

"An impressive group of girls lead with hope and confidence. ...A high-interest, empowering read."
— Kirkus Reviews