Diamond Doris: The True Story of the World's Most Notorious Jewel Thief (Hardcover) 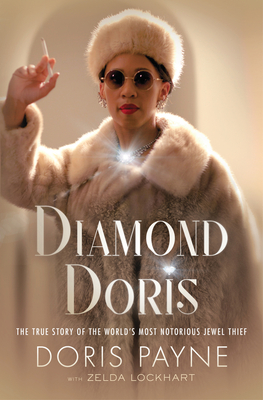 Soon to be a Major Motion Picture

In the ebullient spirit of Ocean’s 8, The Heist, and Thelma & Louise, a sensational and entertaining memoir of the world’s most notorious jewel thief—a woman who defied society’s prejudices and norms to carve her own path, stealing from elite jewelers to live her dreams.

Growing up during the Depression in the segregated coal town of Slab Fork, West Virginia, Doris Payne was told her dreams were unattainable for poor black girls like her. Surrounded by people who sought to limit her potential, Doris vowed to turn the tables after the owner of a jewelry store threw her out when a white customer arrived. Neither racism nor poverty would hold her back; she would get what she wanted and help her mother escape an abusive relationship.

Using her southern charm, quick wit, and fascination with magic as her tools, Payne began shoplifting small pieces of jewelry from local stores. Over the course of six decades, her talents grew with each heist. Becoming an expert world-class jewel thief, she daringly pulled off numerous diamond robberies and her Jewish boyfriend fenced the stolen gems to Hollywood celebrities.

Doris’s criminal exploits went unsolved well into the 1970s—partly because the stores did not want to admit that they were duped by a black woman. Eventually realizing Doris was using him, her boyfriend turned her in. She was arrested after stealing a diamond ring in Monte Carlo that was valued at more than half a million dollars. But even prison couldn’t contain this larger-than-life personality who cleverly used nuns as well as various ruses to help her break out. With her arrest in 2013 in San Diego, Doris’s fame skyrocketed when media coverage of her astonishing escapades exploded.

Today, at eighty-seven, Doris, as bold and vibrant as ever, lives in Atlanta, and is celebrated for her glamorous legacy. She sums up her adventurous career best: “It beat being a teacher or a maid.” A rip-roaringly fun and exciting story as captivating and audacious as Catch Me if You Can and Can You Ever Forgive Me?—Diamond Doris is the portrait of a captivating anti-hero who refused to be defined by the prejudices and mores of a hypocritical society.

Doris Payne was born in Slab Fork, West Virginia. She is the daughter of a coal miner and the youngest of six siblings. Her career as an international jewel thief spans 6 decades.

“This astonishing memoir by a daring and prolific African American jewel thief reads like a thrilling caper novel, even as it reveals hard truths. . . . At the core of this incredible tale, a sassy catch me-if-you-can told from a Black female’s perspective, is a defiant and relentless woman who will do anything to go against what is dictated by her skin color and socioeconomic status.”
— Booklist (starred review)

“Payne’s storytelling voice is easy and intimate. . . .You want to cheer for Payne.  . . . She’s stolen yet another thing. Your heart.”
— New York Times

“Payne’s story has made her life irresistible.”
— Atlanta Journal-Constitution