The Trump Survival Guide: Everything You Need to Know About Living Through What You Hoped Would Never Happen (Paperback) 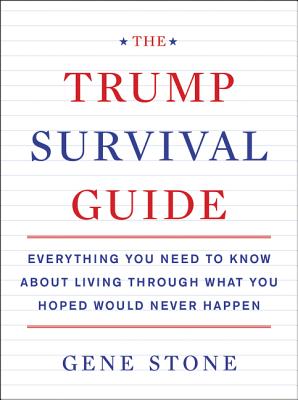 By Gene Stone
Email or call for price
Special Order

A call-to-action for Democrats, moderate Republicans, and other anti-Trump dissenters, detailing the history of social and political policies, how Obama treated them, how Trump has the power to undermine them, and what people can do to stop him.

The stunning election of Donald J. Trump rocked an already divided America and left scores of citizens, including the nearly sixty-five million voters who supported Hillary Clinton, feeling bereft and powerless. Now, Gene Stone, author of The Bush Survival Bible, offers invaluable guidance and concrete solutions they can use to make a difference in this serious call-to-arms—showing them how to move from anger and despair to activism as the Trump presidency is in full swing and he signs one executive order after another.

Before we can successfully engage, we need to be clear about the battles ahead. Stone outlines political and social concepts—including such issues as Civil Rights, Women’s Rights, the Environment, Obamacare, International relations, and LGBTQ Rights—providing a brief history of each, a refresher on Obama's policies, and an analysis of what Trump’s administration might do. Stone then provides an invaluable guide for fighting back—referring to organizations, people, sites, and countless other resources that support positive and possible goals.

While marches and social media are important forms of protest, concrete actions achieve real change. Positive and reinforcing, The Trump Survival Guide presents the essential information we need to effectively make our voices heard and our power felt.

A graduate of Stanford and Harvard, Gene Stone is a former Peace Corps volunteer, journalist, and book, magazine, and newspaper editor. He has also written or ghost-written forty books, including a dozen New York Times bestsellers, and a novel, The Awareness.  His website is www.genestone.com.

Anyone dreading Inauguration Day will appreciate The Trump Survival Guide. Stone lays out the key fights ahead - over women’s rights, LGBTQ+ rights, the environment, health care, and more - and offers actionable solutions to counteract your feelings of powerlessness. This book will help you make a bigger impact.
— Bustle.com

A comprehensive resource guide for individuals worried that certain rights may be in jeopardy, offering the encouragement to actively fight back with as much knowledge and authority as possible.
— Kirkus Reviews

The resulting book is crisp and pragmatic.
— Salon.com

Though the book includes specific ways to attack every issue—joining your local school board to help with education, reporting hate crimes when you see them to help with civil rights—there are broader, universally applicable ways to fight Trump’s agenda.
— Newsweek

The Trump Survival Guide is worth every dime of its price. It is chock full of reference material and addresses not easily found, including website addresses that only a Googlemeister could turn up.
— New York Journal of Books

Everything novice activists need to get started, all in one place. The ‘What you can do’ sections, are varied and each worthy of careful perusal. Americans concerned about their country’s fate under a Donald Trump presidency will find that this book is the ideal resource for meaningful civic engagement.
— Publishers Weekly