Speak No Evil: A Novel (Paperback) 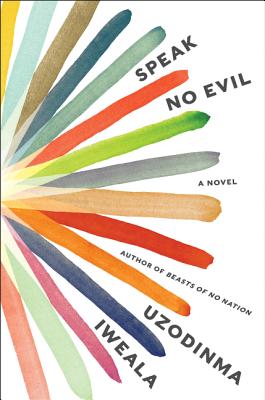 “'This is who I am.' 'This is what happened to me.' These are the simplest of expressions, yet the ability to speak them fully is a privilege not shared by the teenaged protagonists of this novel. Nigerian immigrant and Harvard-accepted aspiring doctor Niru is not able to tell his conservative religious parents that he is gay. The daughter of D.C.'s political elite, Meredith is not able to tell the world what really happened in an alley outside a bar on a hot spring night. Speak No Evil describes how loving relationships are strained, how trust is shattered, and how bodies can be broken when the truth is silenced. This heartbreakingly beautiful story will stay with you for a long time.”
— Jill Zimmerman, Literati Bookstore, Ann Arbor, MI

“We wouldn’t be a D.C. bookstore if we weren’t excited about Uzodinma Iweala’s new novel, Speak No Evil. Iweala deftly delves into the Nigerian immigrant community in D.C. with his teenage protagonist, Niru, a star student athlete at a prestigious private school whose secret of being queer is discovered and met with severe consequences. A story about the bonds—and limitations—of friendship, family, and culture, Speak No Evil delivers on every count.”
— Angela Spring, Duende District, Washington, DC

“Speak No Evil is the rarest of novels: the one you start out just to read, then end up sinking so deeply into it, seeing yourself so clearly in it, that the novel starts reading you.” — Marlon James, Booker Award-winning author of A Brief History of Seven Killings

In the tradition of Junot Diaz’s The Brief Wondrous Life of Oscar Wao and Chimamanda Ngozi Adichie’s Americanah, Speak No Evil explores what it means to be different in a fundamentally conformist society and how that difference plays out in our inner and outer struggles. It is a novel about the power of words and self-identification, about who gets to speak and who has the power to speak for other people. As heart-wrenching and timely as his breakout debut, Beasts of No Nation, Uzodinma Iweala’s second novel cuts to the core of our humanity and leaves us reeling in its wake.

On the surface, Niru leads a charmed life. Raised by two attentive parents in Washington, D.C., he’s a top student and a track star at his prestigious private high school. Bound for Harvard in the fall, his prospects are bright. But Niru has a painful secret: he is queer—an abominable sin to his conservative Nigerian parents. No one knows except Meredith, his best friend, the daughter of prominent Washington insiders—and the one person who seems not to judge him.

When his father accidentally discovers Niru is gay, the fallout is brutal and swift. Coping with troubles of her own, however, Meredith finds that she has little left emotionally to offer him. As the two friends struggle to reconcile their desires against the expectations and institutions that seek to define them, they find themselves speeding toward a future more violent and senseless than they can imagine. Neither will escape unscathed.

Uzodinma Iweala received the Los Angeles Times Art Seidenbaum Award for First Fiction, the Sue Kaufman Prize for First Fiction from the American Academy of Arts and Letters, the New York Public Library Young Lions Fiction Award, and the John Llewellyn Rhys Prize, all for Beasts of No Nation. He was also selected as one of Granta’s Best Young American Novelists. A graduate of Harvard University and the Columbia University College of Physicians and Surgeons, he lives in New York City and Lagos, Nigeria.

“Iweala is a unique and surprising writer....[His] forceful writing, defined by sentences of only a handful of words that move at an accelerated clip, shines when he digs into Niru’s psyche. He has a rare gift for capturing stream-of-consciousness thought, tackling it at a pace that’s quick but authentic.” — Entertainment Weekly

“Iweala writes with such ease about adolescents and adolescence that Speak No Evil could well be a young adult novel. At the same time, he toys with other well-defined forms: the immigrant novel, the gay coming-of-age novel, the novel of being black in America. The resulting book is a hybrid of all these. If he’s something of a remix artist, Iweala remains faithful to the conventions of these forms, a writer so adept that the book’s climax feels both surprising and wholly inevitable.” — New York Times Book Review

“Speak No Evil is the rarest of novels: the one you start out just to read, then end up sinking so deeply into it, seeing yourself so clearly in it, that the novel starts reading you.” — Marlon James, Booker Award-winning author of A Brief History of Seven Killings

"How would Iweala top [Beasts of No Nation]? The answer is by moving us to a different kind of war zone.... Though the destination of this story is tragically unsurprising, it has the stomach-churning pace of a Greek tragedy. Iweala’s scope is modest — those handful of streets, 10 or so scenes, a couple of hundred pages — but the novel burns with teenage intensity.” — The Financial Times

“The classic coming-out narrative describes how the central character makes a leap from one identity to another, into a different, freer life, while the classic immigrant novel depicts what it’s like to straddle two worlds, old and new, with a foothold in each. Speak No Evil is both and neither.... The soul of Speak No Evil is the tortuous, exquisitely rendered relationship between Niru and his father.” — The New Yorker

“A lovely slender volume that packs in entire worlds with complete mastery. Speak No Evil explains so much about our times and yet is never anything less than a scintillating, page-turning read.” — Gary Shteyngart, author of Little Failure

“An evocative narrative and stark dialogue keeps Uzodinma Iweala’s Speak No Evil from a single dull moment.... His characters’ rawness and beauty overwhelm page by page, looping their two stories into one heartbreaking narrative, one that embodies and echoes the pains of current, broader inequalities.” — AV Club

“A timely story of friendship, secrets, and consequences.” — Vogue

“A wrenching, tightly woven story about many kinds of love and many kinds of violence. Speak No Evil probes deeply but also with compassion the cruelties of a loving home. Iweala’s characters confront you in close-up, as viscerally, bodily alive as any in contemporary fiction.”  — Larissa MacFarquhar

“Iweala unwinds crucial issues of choice and the burden of playing multiple parts; says Niru, ‘It’s too confusing for me to live all these lives when I want only one.’ Throughout a narrative spiraling toward tragedy, Niru’s pain is so palpable it will make you gasp…. Highly recommended.” — Library Journal, starred review

“In Uzodinma’s staggering sophomore novel (after Beasts of No Nation), the untimely disclosure of a secret shared between two teens from different backgrounds sets off a cascade of heartbreaking consequences…. Speaks volumes about white heterosexual privilege.... Notable both for the raw force of Iweala’s prose and the moving, powerful story.” — Publishers Weekly, starred review

“A searing take on the notion of home, and the struggle to be at home with oneself.... Speak No Evil deals with less epic subject matter [than Beasts of No Nation], but there’s subtle power in its intimacy and in its depictions of the violence we do to each other and to ourselves.” — Seattle Times

“Heart-wrenching .... A visceral but compassionate portrait of what it means to be different within a family, let alone society at large.” — Washington Blade

“Iweala stirringly brings to life a young man at war with himself in this moving new novel.... Speak No Evil isn’t an easy read. It is, however, compelling, sensitively told, and satisfying.” — Lambda Literary

“A haunting story about identity and power.” — Paste Magazine