Mavericks at Work: Why the Most Original Minds in Business Win (Paperback) 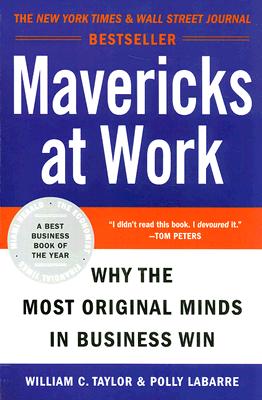 The first book to document this change, Mavericks at Work is business "edutainment" for a smart, ambitious readership, profiling some of the most exciting—and often eccentric—CEOs in the United States, while detailing their remarkable strategies for success.

Who’s going to write the next chapter in the saga of American business? Who’s going to chronicle the best way to compete, the new way to win? That’s the mission of Mavericks at Work, a book that profiles a network of rebels who are creating a new business model that makes use of fresh principles and captures what it means to be a state-of-the-art organization. Including such pioneering companies as ING Direct, Southwest Airlines, Pixar, HBO, Anthropologie, Craigslist, Netflix, and Commerce Bank, this book is nothing short of a lively new intellectual agenda for business.

William C. Taylor is a cofounder of Fast Company and coauthor (with Polly LaBarre) of Mavericks at Work: Why the Most Original Minds in Business Win. A graduate of Princeton University and the MIT Sloan School of Management, he hosts a blog on being "Practically Radical" on HarvardBusiness Online. He lives in Wellesley, Massachusetts, with his wife and two daughters.

Polly LaBarre spent eight years as a senior editor of Fast Company, where she wrote articles on strategy, creativity, and personal success, and co-hosted the magazine's Real Time conferences. She has spoken to business audiences around the world and has appeared on Good Morning America, CNBC, and PBS's Nightly Business Report.