Not In Kansas Anymore: Dark Arts, Sex Spells, Money Magic, and Other Things Your Neighbors Aren't Telling You (Paperback) 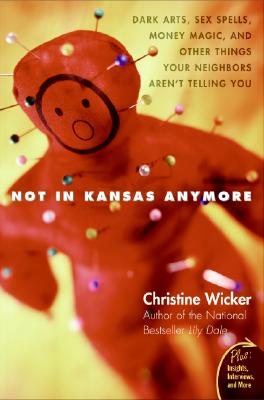 Magic has stepped out of the movies, morphed from the pages of fairy tales, and is more present in America today than you might expect. Soccer moms get voodoo head washings in their backyards, young American soldiers send chants toward pagan gods of war, and a seemingly normal family determines that they are in fact elves. National bestselling author and award-winning religion reporter Christine Wicker leaves no talisman unturned in her hunt to find what's authentic and what's not in America's burgeoning magical reality. From the voodoo temples of New Orleans to the witches' covens of Salem to a graveyard in north Florida, Wicker probes the secrets of an underground society and teaches lessons she never dreamed could be taught. What she learns repels her, challenges her, and changes her in ways she never could have imagined. And if you let it, it might change you, too.

Christine Wicker was raised in Oklahoma, Texas, and other parts of the South. Her mother's grandfather was an itinerant Baptist preacher, and her dad's father was a Kentucky coal miner. During her seventeen years at the Dallas Morning News, she was a feature writer, columnist, and religion reporter. She is the author of several books, including the highly acclaimed New York Times bestseller Lily Dale: The True Story of the Town That Talks to the Dead.

“Readers will find themselves unable to put this book down, absorbed in the story Wicker has to tell.” — Publishers Weekly (starred review)

“Impeccably researched . . . For the curious and open-minded, her book is marvelous.” — Booklist (starred review)

“Both witty and wise....a fascinating read for the curious about the state of magic in America.” — Radiant Magazine