The Miraculous Fever-Tree: Malaria and the Quest for a Cure That Changed the World (Hardcover) 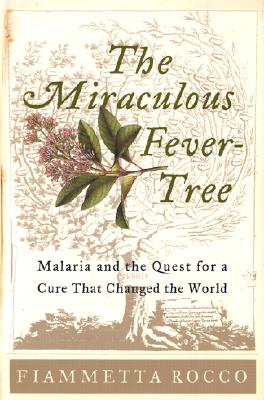 By Fiammetta Rocco
$24.95
Email or call for price.

Malaria kills someone every 12 minutes in Africa. Now known mostly as a disease of the tropics, malaria led to the demise of the Roman Empire 2,000 years ago and ravaged Europe for years afterwards. At the start of the 17th century, Jesuit priests developed quinine, an alkaloid made out of the bitter red bark of the cinchona tree from the Andes. When quinine arrived in Europe, the Protestant powers resisted the medicine fearing that it was a Popish poison. Quinine’s reputation improved, however, when King Charles II was cured of malaria through its offices. Through the centuries, wars were fought to control the supply-through the building of the Panama Canal and into WWII--until Americans synthesized quinine for the first time in 1944.

Rocco describes the ravages of the disease, the search for a cure, and the quest to steal and smuggle cinchona seeds out of South America. The Miraculous Fever Tree deftly illuminates the religious and scientific rivalries, intrepid exploration and colonization evinced by the search for quinine.

Fiammetta Rocco was raised in Kenya. Her grandfather, her father and she herself all suffered from malaria. Ms. Rocco's investigative journalism has won a number of awards in the United States and in Britain. She lives in London, where she is the literary editor of the Economist. This is her first book.

“An absorbing and superbly researched history of malaria and its cure.”
— Sunday Times (London)

“Snappy and sharp...it’s almost a crime that so heinous a disease should be treated to so grand a biography.”
— Kirkus Reviews