Some of My Best Friends: Writings on Interracial Friendships (Paperback) 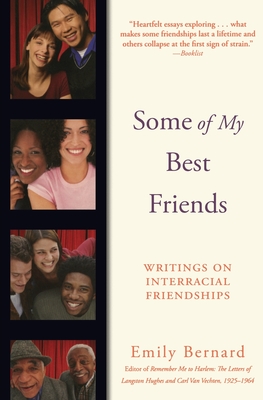 In this unusually honest book of essays and other writings, Emily Bernard examines the complexities of interracial friendships: Latino and white, black and Asian, black and Jewish. In essays from such celebrated writers as Pam Houston, Darryl Pickney, Luis Rodriguez, and Susan Straight, among many others, you'll meet a young Italian American college student who rooms with a sophisticated young black man who can trace his college-educated elders back several generations; a second-generation Korean American from the "hood" who is more comfortable with Latinos and blacks than with Korean kids who grew up in the suburbs; and a Jewish man who reflects on his friendship with a black opera singer. Though culturally and ethnically at odds, perhaps, they call each other friends; working together, playing together, opening their homes and hearts, even when they have every reason not to.

Sometimes controversial, sometimes funny, but always thought-provoking, Some of My Best Friends is a timely work on a subject that has yet to be fully explored.

Emily Bernard was born in Nashville, Tennessee. She has a B.A. and Ph.D. in American Studies from Yale University. She has received fellowships from the Ford Foundation, the National Endowment for the Humanities, and the W. E. B. Du Bois Institute for African and African-American Research at Harvard University. She teaches in the English Department and ALANA U.S. Ethnic Studies Program at the University of Vermont. Bernard is editor of Remember Me to Harlem: The Letters of Langston Hughes and Carl Van Vechten, 1925–1964.

“You can’t afford to miss this book.” — Vibe on Remember Me to Harlem

“Heartfelt essays [exploring] ...what makes some [friendships] last a lifetime and others collapse at the first sign of strain.” — Booklist

“What a wonderful and much-needed contribution to the great American conversation.” — Danzy Senna, author of Caucasia and Symptomatic